Against War, Terrorism and Corruption: Paintings created by Albert Ashok 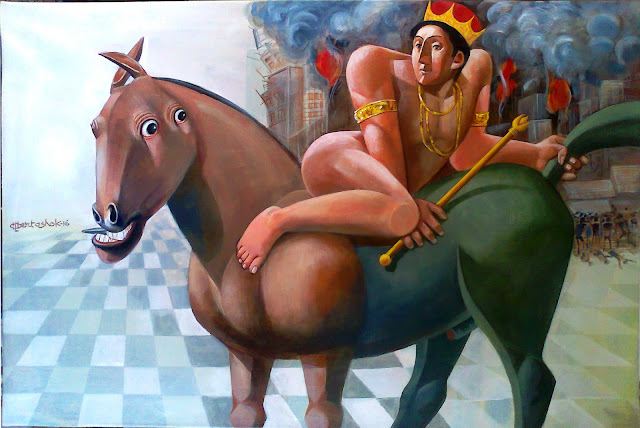 Against War, Terrorism  and Corruption: Paintings  created by Albert Ashok


When Wall street journalist, Daniel Pearl, with American and Israeli citizenship, was kidnapped and later murdered by terrorists in 2002, 1st February, in Karachi, Pakistan, I was shocked so much, as a common Indian, I realized this abominable political conspiracy – The terrorism, will destroy the global peace, I realized, the common people have no benefit from this war and terrorism, war and terrorism should be stopped. It has worst effect or consequence on economy and peace and human integrity. I was not a painter on then, I loved drawing and painting, but being a poor person, had no money to buy canvas and paints. But the shock – the murder of journalist Pearl, drove me mad, it haunted me to do something to condemn the heinous crime against humanity. I drew some drawing and water colour works, showing that we urinate on terrorists, in 2005. 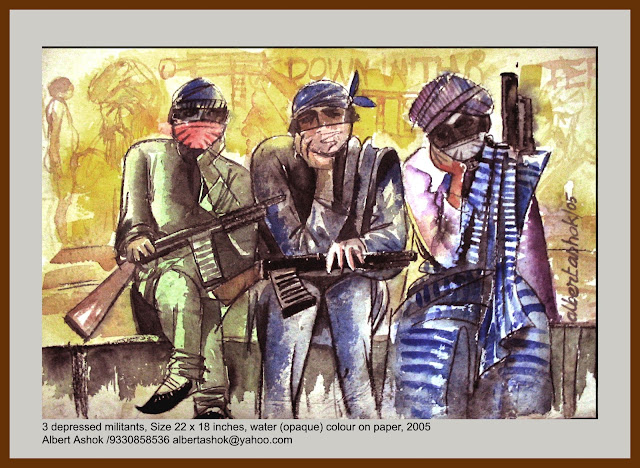 You know, creating art requires a training, after all, it is works of ART, not illustration or anything publication simply publishes. I was fortunate enough that, I knew anatomical life drawing So I started a few water colour works, One work I had a title, ‘Three depressed millitants’. In 2007, I managed some money and bought canvases and painted a big painting, entitled, ‘The Killers’. 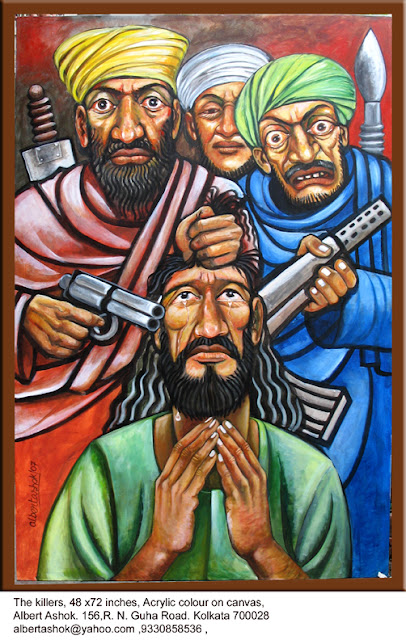 On then, I had a group show, at Birla Academy of Art and Culture. In 2008, I joined a world competition, ‘Freedom to create prize’, by a philanthropic organization, ‘Art Venture’, where about 800 (more or less) participants from 80 (More or less) countries had joined. The organization had featured me globally through their website. It encouraged me my lonely fight against politically murder, terrorism, and corruption against humanity. 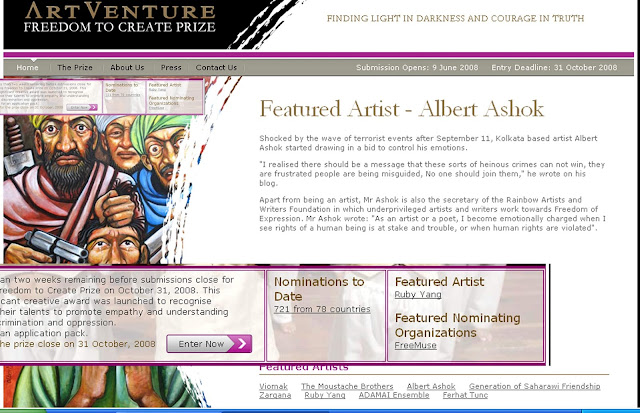 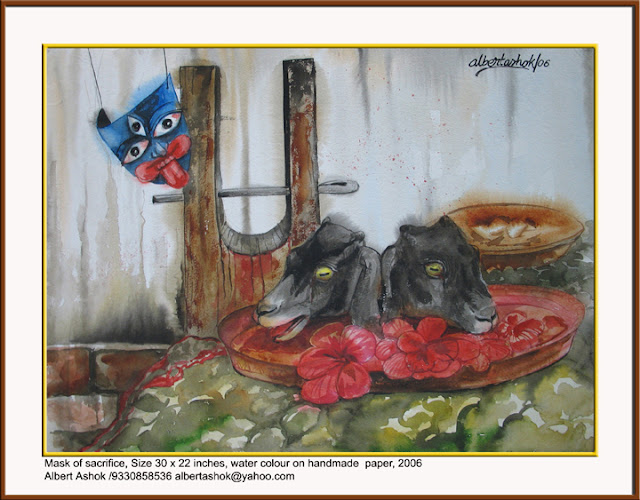 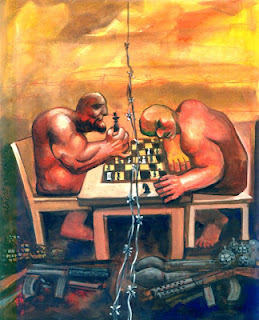 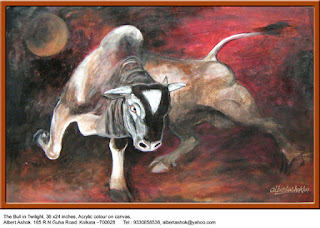 I am a very unfortunate man of India. Who has no school education, due to poverty, so got no job, loved art and literature, and want to write books on art and literature, but have no resource. I have no home, no income, nothing to survive. I live in this West Bengal state of India, where I am rewarded with a miserable life and inhumanity. I just cant figure out whether I should continue my struggle or commit suicide. I know, you will read this and keep quiet, because, You are not suffering like me or your life is secured.or you have nothing to do with me. I am happy that whether I die or live, I could have managed a meaningful life. I wrote about a hundred books, which were used by millions, and they were published by two dozen publishers, though they did not give me my dues, royalty.
My house owner given me a notice for eviction due to nonpayment of my rented rooms. I cant blame him, his is only income source is his house rent. My paintings are not being sold. The government of the state is apathetic, they have their interests on politics and power. And their leaders are involved with huge money scam and extortion. The journals, periodicals and TV medias are after money making business. So, there is no hope. I think , before I die I should let you know that a common man struggled hard to live but failed, due to non cooperation from the community he lived.
May be, I would be doing a few more paintings before my voice sinks. Two years ago, 2016, I painted a series of horse riders, titled “ Chaos in Wonderland: the naked King”. Here, this paintings continue the same politically incorrect situations. The leaders of countries are naked and unworthy, they never think for common people. The war and terrorism are burning people’s life. We have no food for the callousness of government and their greed for power and money. It is condemnable.
My style of painting is based on geometry, a multi sided objects. I call it redefined cubism, hard and soft, solid and liquid blending or merged in figurative form.
I was obsessed with cubism from my early days of learning paintings. From 1982, I tried to depict animal form in geometric pattern. On then, I had no money to draw and paint, so I restricted my hand with pen and paper. Black and white sketches. From 1983 I went through great hardships, I practiced drawing, till it is 2013 I resumed my ambition with geometrical pattern that is Cubism. 3 sided objects. After a lot research and experimentation I found my way of paintings, I call it Redefined Cubism, Blending or merging two opposite effect like solid and hard form and soft and liquid form. Besides I apply 3 elements while I create my paintings. Hope my paintings would win your love and thought. Anyway, enjoy!

I would like to suggest XIHIAS IMMIGRATION to everyone who is planning to migrate to Canada, Xiphias is the top Canada visa consultants in UAE , Visa experts from Xiphias helped me in the best way in getting my PR visa to Canada.

Excellent and very cool idea and the subject at the top of magnificence and I am happy to this post..
https://myseokhazana.com/

There are variety of professions in various industries such as Accounting, Analytics, Marketing, IT, Finance etc. So the main concern is to choosing the best job-oriented short term courses when so many courses are available for a short period of time. This short term courses enables you to boost your professional skills and helps in move up the corporate ladder.

Thank You so much! for providing the information regarding great artists. Regards. Fine arts courses in india


Incredible service from the most delightful and professional people. Best Immigration Consultant in Dubai

Whether you are a small, medium and big enterprise, we are the best yet cheap SEO services provider company in your domain. You can avail of our services if looking for such kind of service for your business

Excellent and very cool idea and the subject at the top of magnificence and I am happy to this post..
Best Immigration Consultant in Dubai


This blog is very interesting & thank you for sharing with us. Canada Immigration Consultant in Dubai

If you want to install Garmin map updater, our Garmin professional team will help you in the right ways. If you get stuck in the installation or update in the process, our Garmin experts will guide you step by step for getting the list of recent locations or routes. For any confusion, our Garmin support team will provide you instant help.

Configured a new printer for faxing? Need to check if it’s working fine? Use test fax HP setup to check via the control panel of your printer. Open printer control panel, click on tools and Run Test fax HP. After running the test, a report will be prepared. Review the report to check if all the things are working fine. In case you need any assistance from the technical executives, feel free to reach us.

Against War, Terrorism and Corruption: Paintings created by Albert Ashok

cosmopolitan express
I am a Painter, an Author/Poet and a Graphic Designer, I teach painting . My students are all senior-- Art college students. and people who wants to be an artist, and those who wants to have little time with drawing and painting. I believe ' WE CAN MAKE THIS WORLD A BETTER PLACE !' I exhibit my paintings at galleries of different states in INDIA. 45 group shows, 10 solo shows, in different parts of India. And published about 100 books on Drawing paintings and poetry. You can buy my paintings, contact(+91) 9330858536, 9831445765, kolkata,India. for email type albertashok at gmail dot com. I LOVE TO HAVE PEOPLE AS FRIEND AND WORK FOR 'FREEDOM OF EXPRESSION ' , IMAGINE YOU WILL BE WITH ME someday 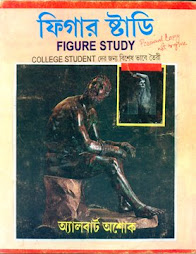 A bengali book of figure drawing for advanced student 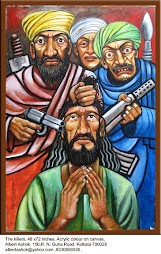 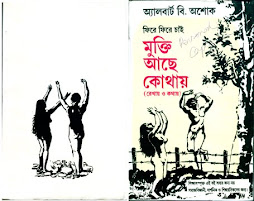 A bengali book of poems

cartoon and the time I pass

My association with paintings and people